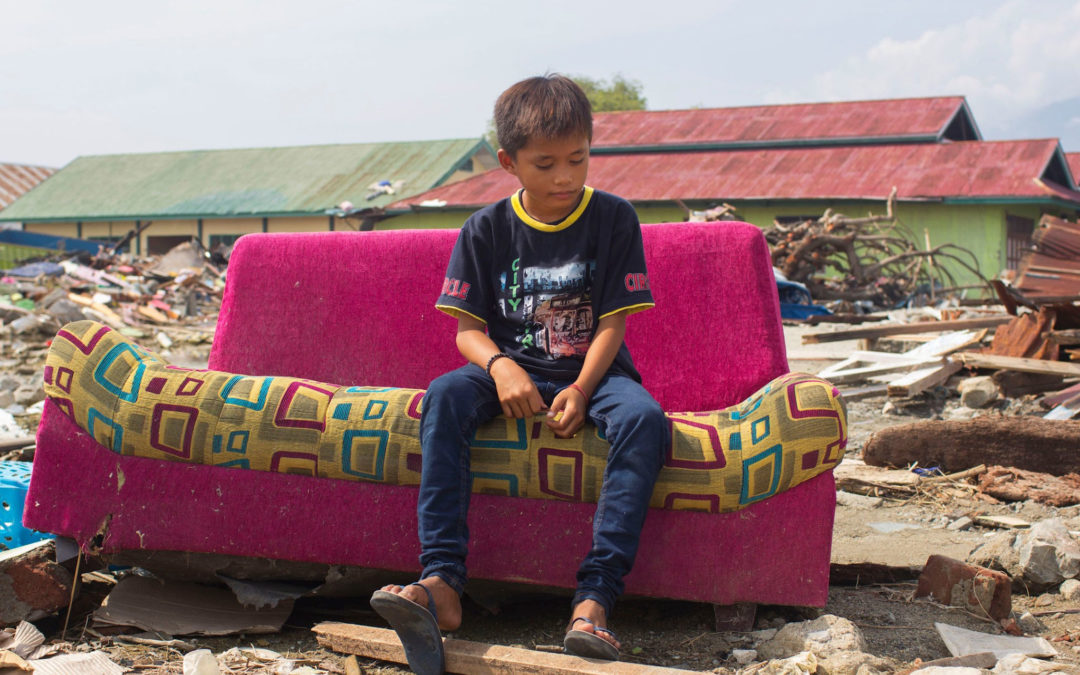 Posko Palu is a documentary that tells the stories of children impacted by a series of earthquakes and a subsequent tsunami that swept through South Sulawesi in September 2018, claiming an estimated 4,340 lives in the city of Palu and its surrounding regions as a result.

Melanie Filler is the producer of Posko Palu, which was awarded the honours of both the Jim Schiller Prize for Best Collaboration between Australian and Indonesian Filmmakers and Best Documentary at ReelOzInd! 2019.

When, why and how did your collaborative team decide to make a film together?

At the time there wasn’t much information and only traces of the real impact were known. As the headlines accelerated the images we saw were harrowingly familiar. There was the earthquake in Lombok a month prior, and we had recently completed a film exploring the journey to recovery in Indonesia’s Aceh province which suffered the most devastating impact from the 2004 Indian Ocean tsunami. We had an impulse we should do something to contribute to the situation in Palu and considering our skills and resources it should be a film.

What was the team’s aim in making this film?

We wanted to show our compassion and solidarity as neighbours from Australia and around Indonesia and help convey the experiences of families in Palu. We focussed on understanding how disaster and displacement impacts children. Children are among the most vulnerable in times of turmoil and their voices and concerns are not often heard. With experiences of displacement becoming alarmingly common around the world we wanted to explore this profound issue from the perspective of youth.

We hope the film sparks deeper understanding and empathy towards the situation of children in Palu and highlights the incredible resilience of youth in crisis. If it could be used to motivate discussion and education around disaster risk reduction in the region that would be great.

How long were you there filming for, and how long after the disaster did you arrive?

We arrived in Palu about 10 days after the disaster. It was a 3 day drive to Palu from Makassar in South Sulawesi where we met, hired a car and stocked up on supplies. We filmed in Palu for just over a week.

Describe your thoughts and surroundings when you first arrived in Palu.

On the outskirts of Palu children were gathered by the roadside chasing cars and aid trucks in hope of donations and snacks. Around Palu the physical destruction was severe. Big buildings were crushed, chunks of the road had burst open, and in neighbourhoods affected by soil liquefaction entire homes had been dragged and swallowed in the mud.

What was most confronting were the hundreds of makeshift campsites that had sprung up in every corner and crevice of the city. Families had no other option for shelter and were camping in open spaces everywhere. In these camps we met a mother with her newborn baby and an elderly man battling cancer carrying his catheter around with him. 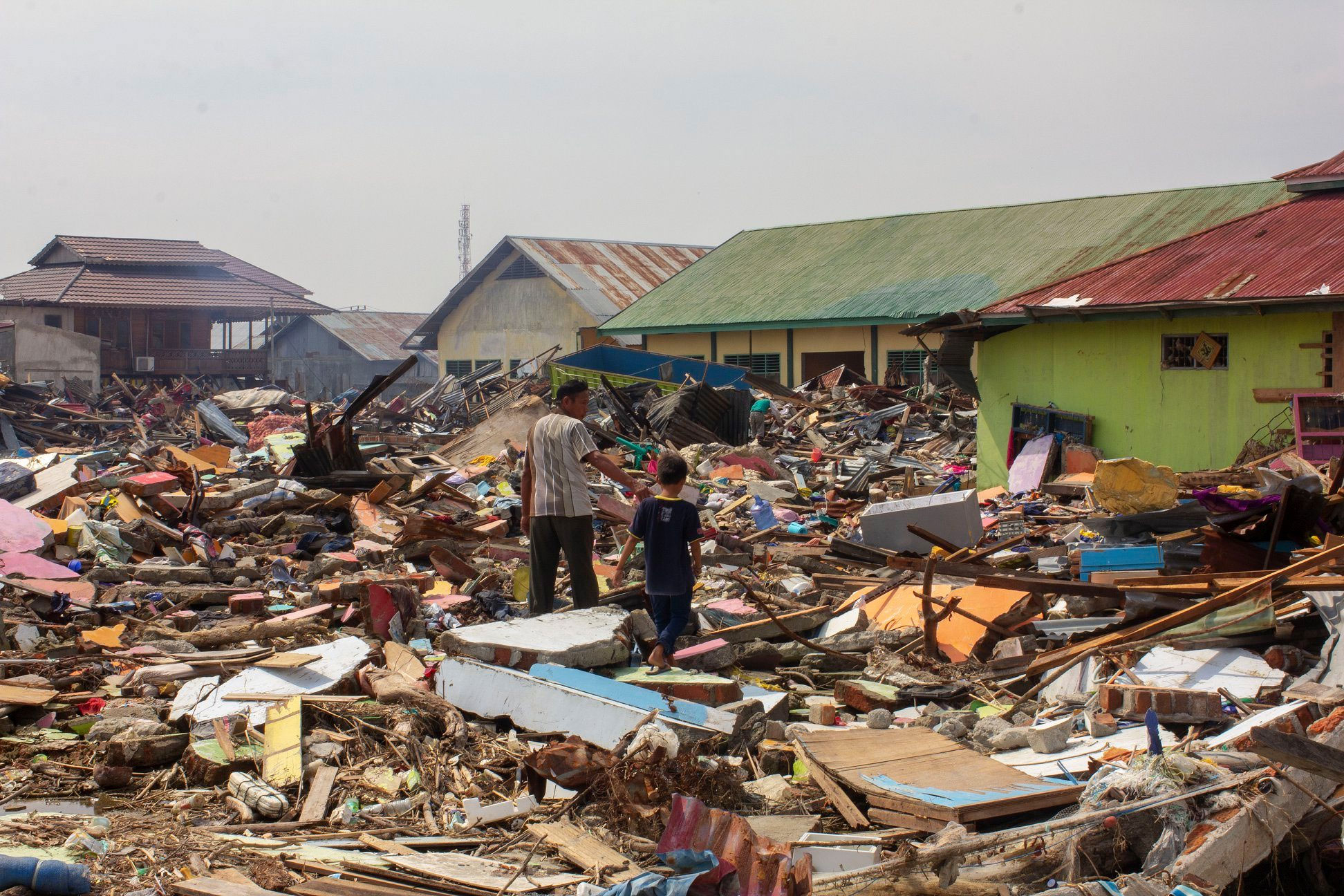 The children seemed to be able to forget the tragedy for periods. Did you feel this was the case, or was it always there?

The children are incredibly resilient, helping their families with chores and contributing to the routine of the camp. As Diva shows in the film, after all that is done there is time to just play with her friends. There is also a lot of time spent agitated, upset, listless waiting around in the heat or rain. But every time the trauma healing volunteers arrive the children would rush towards them bursting with energy to play and learn. Seeing that transformation and the children’s ability to remain playful is very heart-warming. It’s hard to know whether they were able to forget the tragedy in these moments, it was so soon after the disaster I think they were mostly still in shock.

Were the adults different?

The adults were often pre-occupied but there were still moments of laughter that would erupt and bring relief to all. One night it was pouring with rain, the tents were getting drenched and everyone gathered under a veranda sorting through donated clothes. There was an abundance of womens clothes and a few men began layering them on in ridiculous combinations, dancing and posing with the children much to the amusement of all.

What actions do you hope to see taken to support the recovery process?

One year later 57,000 people are still homeless and living in cramped campsites. Many are yet to receive government assistance payments and feel their needs have not been heard. We hope there is greater community consultation going forward and that survivors will quickly receive the financial assistance and support they need to rebuild their lives.

We also hope there is more discussion and education around Indonesia about what governments and communities can do to mitigate the risks in a region so vulnerable to natural disaster. Palu has a history of periodic natural disasters and scientific reports pointing to the ongoing risks in certain areas were mostly ignored as the city expanded.
We recently learnt there is a rich tradition of local wisdom (such as lullabies and place names) guiding communities through the risks of disaster. There is an amazing team of local filmmakers working with communities in Palu to gather, revive and adapt this local knowledge into their own strategies to be better prepared.

What questions remain for you about your subjects? In what theme or direction would you be interested in if making a follow up documentary?

If we were to make a follow up documentary we would continue to observe the daily rhythms of Kesya, Diva and Akbar’s lives, how they are adjusting to their environment in different campsites and returning to their respective schools. We might explore how they are having to change and adapt as young people, how their parents and friends are coping, what they do for fun, what sort of things make life feel more normal and how they are coming to terms with past trauma and ongoing anxieties. We would be interested in how their aspirations and opportunities develop as they become teenagers and their perspective on the situation in Palu – what is being done for and within the community to recover and prevent future disaster.