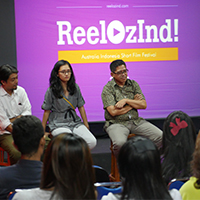 Submissions are already streaming in for the ReelOzInd! Now, anyone can get involved by nominating a youth judge for the jury or hosting a pop-up film festival.

One Australian and one Indonesian student will be selected to join the esteemed jury, which includes award-winning filmmakers, producers and respected media academics.

To be eligible, students must be between 13 and 18 years old. Nominees must submit a 30 to 60-second video of themselves speaking on the topic ‘That short film is a great storytelling medium across cultures’. Videos or links can be sent to Festival Organiser Jemma Purdey at reelozind@australiaindonesiacentre.org with the subject line: ‘Youth Jury Nomination’.

Schools, universities and community organisations can also get involved by hosting a pop-up ReelOzInd! Australia Indonesia Short Film Festival of their own.

Submissions for short films, youth jury nominations, and applications to host a pop-up festival are open until July 31. To learn more about the competition and festival, visit www.reelozind.com and join us on Facebook and Twitter for regular news and updates.

Here’s what partners are saying about ReelOzInd! 2016.

“Amazing competition and fantastic communication from organisers. Great that my film was part of a brilliant group of films that toured 14 cities in Australia and Indonesia”

“The selected films really reflect the uniqueness of Australian and Indonesian culture and the relationship between the two countries that not many people know…. ReelOzInd! plays a strategic role in growing the understanding among the young generation, future leaders of both countries.”

“We are honored to have the opportunity to be the host of this very prestigious event. We are looking forward to more collaboration in the future both with our department in particular, and our faculty in general. This has indeed been a very interesting and beneficial activity on both parts. We are hoping that by hosting this event we have also contributed to the better relationship and friendship between Australia and Indonesia.”