Home » ReelOzInd! 2017 to premiere at ACMI Melbourne and IFI Yogyakarta, and travel to 12 more cities 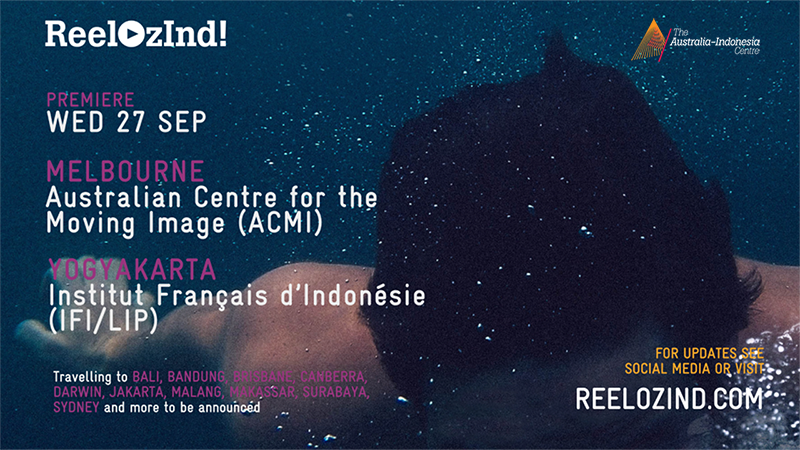 The ReelOzInd Australia Indonesia Short Film Festival returns in 2017, bringing the brightest talents in Australian and Indonesian independent filmmaking to all corners of both nations.

The festival will premiere simultaneously at the Australian Centre for the Moving Image in Melbourne and Institut Francais Indonesia in Yogyakarta on Wednesday 27 September, then visits Adelaide, Malang, Canberra, Jakarta, Denpasar, Ubud, Brisbane, Ciamis, Jatinangor, Darwin, Surabaya, and Sydney throughout October and November.

“We’re so excited to bring the ReelOzInd! festival back after such a promising debut in 2016,” says Festival Coordinator Jemma Purdey, “and 2017 is set to be even bigger and better.”

The film reel was chosen from more than 140 entries during the competition phase of ReelOzInd, which ran from April to July. “The quality of the films submitted, and the talent shown from these filmmakers, has been remarkable,” Jemma says.

“It really felt like all the filmmakers embraced this year’s theme of ‘Water’. It’s such a fundamental part of the lifestyle of both countries. We’re island nations, and the films celebrate that. And the festival itself showcases such a diverse range of styles and stories.  There’s mythology and drama and humour and stark reality – a bit of everything.”

The festival will feature 14 of the best short films Australia and Indonesia have to offer – fiction, documentary, animation, kids’ films – ranging from as little as 60 seconds up to 10 minutes. The winners were chosen by an elite jury of industry professionals: blockbuster filmmaking team Mira Lesmana and Riri Riza; esteemed producer Andrew Mason; critics and film educators Krishna Sen, Novi Kurnia and Fransiska Prihadi; and award-winning young director Yosep Anggi Noen.

This year saw the introduction of the Youth Jury, with three students adding their voices to help select the Best Youth film. It also focuses even more on education, incorporating Teachers Resource Activity Kits for schools, universities and community groups, who are already planning their pop-up festivals.

Following the premieres in Melbourne and Yogyakarta, the festival travels across both nations throughout October and November, with even more dates to be added. The shortlist will also feature at ACMI’s Mediatheque from September 27 to October 4, where visitors from around the globe can watch every film.

The ReelOzInd! festival events are free, and open to all. Tickets can be reserved for the ACMI premiere at www.acmi.net.au/events/reelozind. For more information, visit reelozind.com.