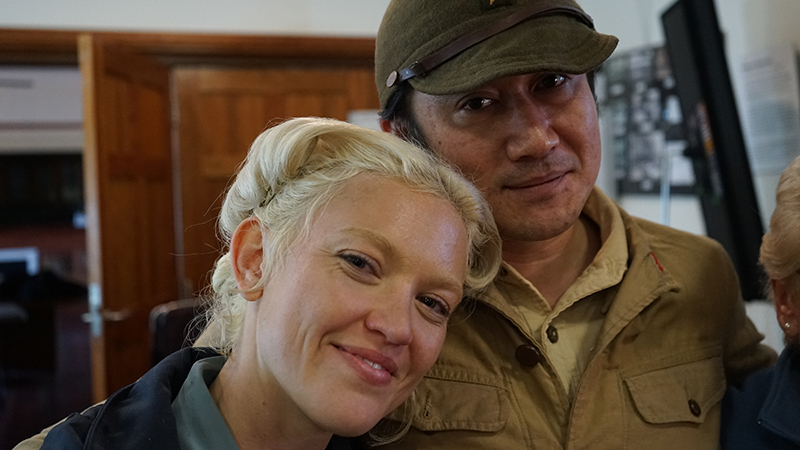 Tell us about ‘Daily Bread’? What was your inspiration for this story?

Daily Bread is based on events from a tiny paragraph in my grandmother’s book Fifty Years of Silence. The event depicted (involving the fluffy white cat!) was well known in my family, long before she spoke out about her forced internment in a war brothel, and she told it as a humorous anecdote. While making the film, I stopped one day and thought – wow, Oma, this isn’t funny at all! It is this gulf between how she tells her stories and their reality that exposes the complex woman hiding behind the unwavering smile my whole life.

Further to uncovering the complex woman of my grandmother, it is the way history is written by the victors, that I aim to interrogate. Far from trying to demonise the Japanese soldiers, I hope to humanise them through the character of the Camp Commandant. The cat symbolises his humanity –Does it remind him of his wife? His children? He probably wanted to be back home just as much as these women.

The main catalyst for making Daily Bread was to create a proof of concept so that we can make the feature film about her incarceration as a ‘comfort woman’.

In my late teens, Oma turned to me and said ‘and you’re going to make the feature film about me!’ She may have been kidding, but I took it very seriously. Then I had to figure out how to make a film! So I have spent the last decade working in Art and Costume Departments in film and TV, educating myself how to be a film maker. Given that my dad is a filmmaker and mum is a fine art painter, I was probably always going to be an artist of some kind, but this gave me intense purpose and direction.

But I want to make this film about her, specifically, because I feel the duty and honour, to take my place in this new canon of female story tellers that is emerging before our eyes. As artists, we can play an important role in shaping public understanding and consciousness, and because women are still being brutalised in modern war zones, it is vital that we keep these stories in the public eye, to keep the pressure on politicians and academics to keep working towards the rights and safety of women.

What kind of research did you need to do before making the film?

Jan’s book, Fifty Years of Silence was the main point of reference for Daily Bread.  For the feature film that we are making, we will delve deeper into researching the history of Indonesian/Dutch relationships as well as Japanese attitudes during World War Two.

Because this is such a small clip of a larger story, we don’t see the Indonesian perspective in Daily Bread. Over a longer story that would be an important part of the research.

Jan came from the Dutch colonial class and has Indonesian heritage and I want to understand these relationships better. I feel like it’s important that these stories are told – contemporary writers like Eka Kurniawan are part of this movement.

We had to research historical costume and Japanese Imperial uniforms as well as hair styles and military trucks!

Where was the film made? How many people made up the cast and crew? How long did it take to shoot and how long was post-production?

We shot Daily Bread at Scheyville National Park, just outside of Sydney. The park managers were absolutely wonderful to work with – and it was wonderful to see all the bird watchers that pass through the park.

We had a large cast and crew (for a short film). I think we had about 70 people on set for the three-day shoot. All of the children in the film are Dutch speakers – I found them through the Dutch Australian Society – D.A.S. Neerlandia – who put me in touch with the Dutch language school, De Nederlands School de Kangoeroe. They were wonderful children who came to every rehearsal and shoot day with big joyous smiles on their faces and positive attitudes. They really gave it their all.

Post-production took longer as it took me a while to find my incredible editor. We worked for about a year editing, sound designing and colour grading the film.

You play the lead role. How was the experience being actor/director/writer?

This project was an amazing challenge to my character. I had two incredible dramaturgs – Nadia Townsend and Jose Antonio Se – work with me for eight weeks in the lead up to the shoot. We workshopped the feeling of imprisonment to see what kind of character would emerge from these limitations they would put on me. They were mostly physical exercises, so that these feelings were able to be accessed through instinct when I was on set during filming. We discovered that I have an instinct very similar to Jan’s, to resist and fight against these forces. It is something that Jan talks about in detail in her book – her constant resistance of the men in the ‘comfort station’. It is something people marvel at – why didn’t she stop fighting, it would have been much easier for her? And she answers that question in the book – she just couldn’t. That’s it.

Because I had the strong and capable support of Nadia and Jose, I felt very safe to explore the role, without letting it damage me deeply. We always worked mindfully, doing slow, considered warm-ups so that we could ‘step into’ the space of Jan’s world, and then step back out again. Being able to feel the fear of the soldiers, and the loving support of other women that developed through rehearsal and the shoot, I was able to step inside my Grandmother’s skin and story in a way I have never fully understood before. Shooting the feature will be far more harrowing as we will shoot inside the ‘comfort station’, but I am confident in my amazing team to make it possible for me.

I also produced Daily Bread, which was an incredible experience. It meant I truly brought together all the wonderful crew and cast and knew everything about everyone. It was an experience unlike anything I’ve done before. I can’t wait to replicate it on a large scale!

Wearing so many hats could be confronting, but because of the unshakable team I surrounded myself with, anything was possible!

Have your films been screened outside of Australia before? How do you think Indonesian audiences will respond to the film?

This is my first film! It is screening in The Netherlands in a few weeks, as well as Indonesia, the US and Poland.

It is hard to know what the Indonesian reaction will be to Daily Bread.

The only reference I can take is Eka Kurniawan’s book, which touches on this subject matter from an Indonesian perspective, and that was well received.

I am thrilled for Daily Bread to be screening around Indonesia as this is my Grandmothers birthplace and very close to her heart.

As I understand, the interpretation of that period is quite complex and there’s mixed feelings around that time because on the one hand, Indonesia gained independence after World War 2, which is a historic moment, but on the other hand it was a time of war, and great sadness. I’m by no means a historical expert on Indonesian history and I am really looking forward to learning a lot more about it through development the feature script. I think that the screenings through ReelOzInd! will be great to get feedback from a Indonesian audience so I can get feedback, which can be incorporated into the development of the feature.

I hope this is a conversation starter for an important historical period for Indonesia.

What’s next for Daily Bread?

Hopefully it will be accepted into more festivals around the world! The last few years have seen an explosion of women’s film festivals and I’m really excited to participate in some of them. We are also already working on the feature film, so it’s all stations go over here.