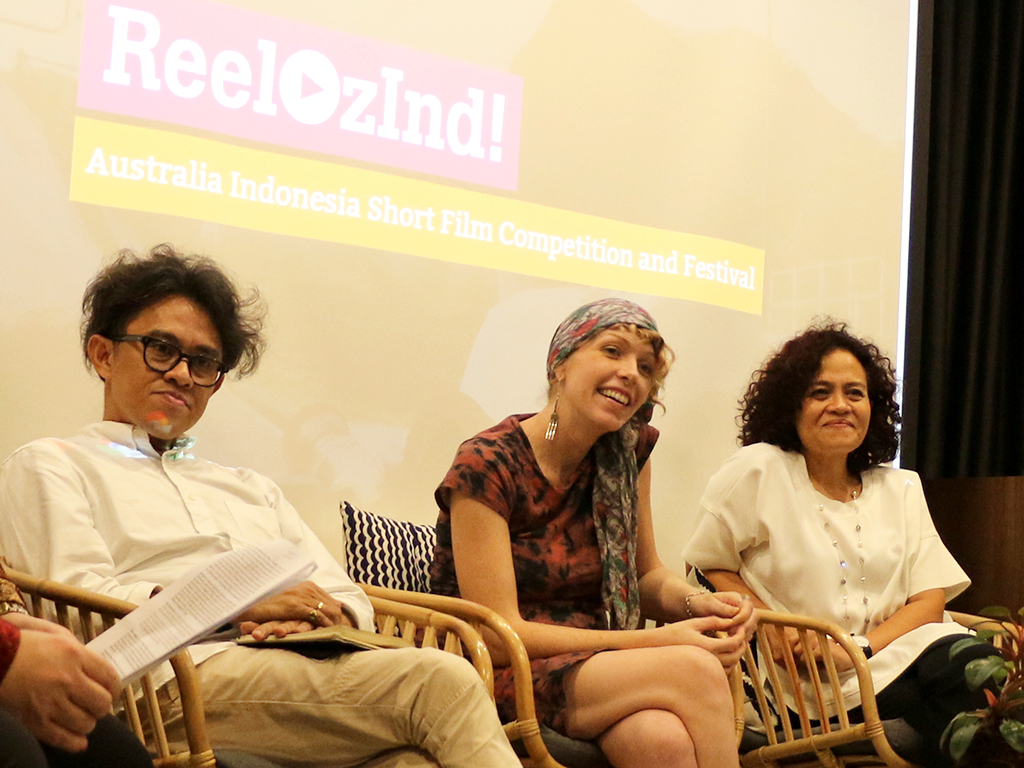 At an event at Kinosaurus in Jakarta on Friday 15 April, Riri Riza and Mira Lesmana appeared on a panel to discuss short film and announce the opening of submissions for the ReelOzInd! Short Film Competition and Festival.

Mira said, “I will be an ambassador, to promote this very important festival. I hope the festival will receive many submissions because the genres are varied, it could be animation, or drama…and so on.”

Riri added, “This is a very exciting festival and hopefully it will have its second, third, and fourth editions and continue for some time. I imagine young people in Indonesia will be eager to learn about their neighbour. I hope they will investigate and find creative and interesting themes for their short films and during this process they will learn, and through this learning process, a cultural process will occur.

“This festival will open a pathway for young people in Indonesia to bring new perspectives, new pictures of Indonesia, which I hope would be fresher and wider than the standard approaches of only talking about Bali or other common stereotypical portrayals when they talk about our identity as Indonesians.”

Indonesian Ambassador to Australia H.E. Nadjib Riphat Kesoema has also lent his support to the competition in a video message.

He said, “Even though we are neighbours, living less than 200kms from each other, we still don’t know much about one another. It’s like two families, in two houses, living in the same neighbourhood. Every day they’re tired with their respective work, school and social commitments, then they forget to spend enough time to get to know their neighbours.

“This inaugural short film competition, with the theme ‘tetangga’, or ‘neighbours’, is like one family getting invited for a barbecue and drinks by their neighbours. And you know how Sunday barbecues are, like a picnic – we meet, we share stories, we eat, we laugh, and sometimes we cry together. We spend time with each other and listen to the real story.

“And I bet those stories will be much different from the political drama and stereotypes we hear from the news headlines.

“To all aspiring Australian and Indonesian filmmakers out there: lights, camera, action!”

Submissions to the ReelOzInd! Short Film Competition and Festival are now open. Visit www.reelozind.com to learn more and submit your film.