Home » Cultural exchange through the screen: creating a short film for ReelOzInd! 2017 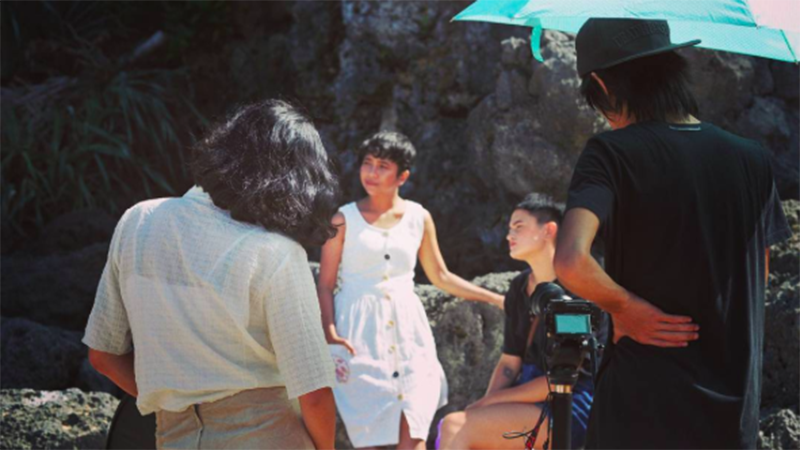 It was one in the morning. I was lying in a hard, cold bed in a cheap seaside motel in Yogyakarta’s Gunung Kidul region, where the neon lights outside penetrated even the closed curtains, not to mention my closed eyelids. My jittery, excited friends were in the rooms across from me, and in four hours we were getting up to shoot our first short film. What we lacked in experience, we made up for with semangat – sheer positivity – stirred up with plenty of hot instant coffee.With my co-director Jonathan ‘Joe’ Soerjoko, I was getting ready to shoot a film for ReelOzInd!, an initiative created by the Australia-Indonesia Centre and supported by Indonesian film heroes Mira Lesmana and Riri Riza. ReelOzInd! is a new short film festival – this year was its second – and is exciting because it allows Australian and Indonesian filmmakers to exchange culture through film. It is free to enter, has youth categories, and does not discriminate against films made even just on iPhones.

This inclusivity makes it a haven-like platform for emerging filmmakers like myself and Joe. Joe has a background in business, and I have one in theatre acting – we are by no means film school graduates. But, we are film lovers. We met in Universitas Gadjah Mada’s exchange program and, one night in April, we decided we would create a film in time for this year’s ReelOzInd!. Joe is a Sydney boy whose family is originally from Jakarta, and my family is Australian-Balinese. While brainstorming for a screenplay, it became apparent that our shared experience of cross-cultural confusion had strength. We decided to link up this theme with ReelOzInd!’s theme of water, to express what it means to long for a ‘home’ across the seas.

The project blossomed under the guidance of many understanding and encouraging creatives whom we had befriended in Yogyakarta. Arsita Iswardhani, for whom I have immense respect, was one of the film’s cast members and is a resident artist at Teater Garasi. She gave me invaluable help with script editing, storytelling and language. Grayce Soba, our powerhouse editor/cinematographer/sound engineer, runs his own recording and video-editing studio, and shared with Joe and I his technical knowledge, his studio and his equipment. We spent three days shooting in Gunung Kidul and in Yogyakarta. We had limited time, so we had to work fast to both shoot and edit. During editing, Joe and I would drive north to Grayce’s studio in the afternoon, where we would usually edit until midnight. Those cramped, dark editing sessions were tiring, but filled with fun and delirium, fuelled as usual by instant coffee, as well as ironic dangdut remixes and plenty of soto and ayam geprek takeaway runs.

Our finished product was Hilang, or Lost by its English title. It is a ten-minute-long mystical mini-drama involving a lot of gorengan, ocean imagery and overdubbing, thanks to some seriously powerful sea-breeze interfering with takes. As well as Joe and my first ever short film, it was also our first ever Indonesian-language creative project, a milestone of which I am infinitely proud. Of course, it is not a perfect film, which makes me all the more excited to learn from it and apply my new knowledge to my next film project.

Our team attended the festival premiere in Jogja, and I got to catch a screening in Bali too. It was great to watch the other films and to meet the other filmmakers – I met Dery Prananda, co-winner of Best Film, and Winner Wijaya, whose film Ojek Lusi was my festival favourite. Indirectly, the festival gave us the means to engage with a great sector of the Indonesian film community. This is unsurprising: the festival seems powered by a passion for culture and connection, and inspires such connection amongst those involved. The screenings were informal and hosted vibrant young crowds, perfect to attend with a gaggle of friends and to ngopi at after with other attending filmmakers. Its strong social media presence also echoed its youthful focus, and lent anchorage and unity to the geographically widespread screenings.

Joe and I had an awesome time creating Hilang and felt honoured when it ended up winning Best Fiction at the festival. Joe is now focusing on a media and video-marketing internship in Jakarta, with intentions to keep creating film. I am writing a new theatre script for a more Australian context, and look forward to delving deeper into writing and acting for film, too. Both of us foresee working in Indonesia again as creatives in the future.

Rosie Clynes wrote, co-directed and starred in Hilang/Lost, winner of Best Fiction in ReelOzInd! 2017. She is a 2015 VCA graduate and emerging theatre-maker based in Melbourne. To watch the films and see full festival dates, visit the ReelOzInd! website.