Home » A festival of short film: ReelOzInd! returns in 2018 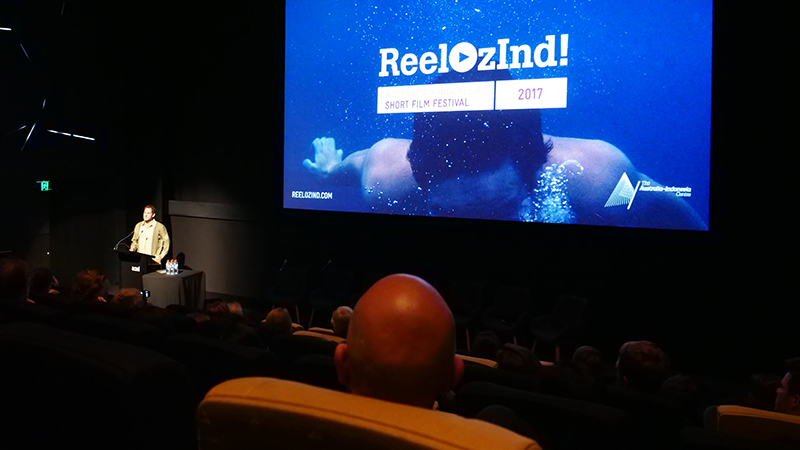 After the success of ReelOzInd! Australia Indonesia Short Film Competition and Festival in 2016 and 2017, we are very excited to announce its return again in 2018.

Over the past two years ReelOzInd! has attracted hundreds of entries from both nations, with screenings for live audiences in dozens of cities in Australia and Indonesia. We’ve reached thousands more online with viewers given the opportunity to vote for their favourites to select the People’s Choice Award.

One of our awarded filmmakers, Dery Prananda, from Yogyakarta [Director/Producer, ‘Amelis’ (Best Film 2016) & Director/co-Producer ‘Arohuai’ (Co-Best Film 2017)], reflected on the impact ReeOzInd! has had on his career so far, “ReelOzInd changed my life. For me, ReelOzInd is like home where you can develop yourself. From there, I had many extraordinary opportunities related to filmmaking. Beside my film being screened in many places in Indonesia and Australia, the most important thing is meeting with many peoples and opening new possibilities in the future.”

For Blair Harris from Melbourne (Director, ‘Dog and Robot’, Winner Best Animation, 2016), the competition and festival similarly opened up new opportunities for him as a filmmaker and introduced him to some great Indonesian stories, “Seeing all the great work from Indonesian filmmakers and also collaboration entries alongside my film Dog and Robot up on the big screen at ACMI was amazing. I even got to speak on a panel with the producer of The Matrix, one of my favourite films.”

This year the theme for our competition is YOUTH/ PEMUDA.

ReelOzInd! 2018 is seeking documentary, fiction and animation short films of up 10 minutes duration, incorporating this years’ theme within the story narrative, or as a visual element in the film.

Awards will be given for Best Film, Best Documentary, Best Animation, Best Fiction and special awards for Best Youth Film (created by a filmmaker 13-18 years) and Best Collaboration between Australian and Indonesian filmmakers.

Our Jury of high-profile Australians and Indonesians from the film industry will be back again to select the best films in each category. These will be screened across Australia and Indonesia from September to December 2018 in our pop-up and travelling festival (bioskop keliling).

This year we are also very excited to announce a new companion competition Ultra Shorts. Ultra Shorts are films of up to 30 seconds in duration, to be shared and voted for on our social media platforms. It’s a fresh way to open up filmmaking to younger and emerging creatives, or just anyone with a camera phone and a great idea!

A wonderful feature of ReelOzInd! in 2017 and continuing in 2018 is our open invitation to schools, universities, community groups and film enthusiasts in general to host a pop-up festival screening of their own. In 2017 we loved sharing photos and reports from these events with our community through social media and our website.

ReelOzInd! 2018 is open for submissions 1 April and closing 31 July.

We invite you to visit our website to discover how you can get involved, get your work shown on the big screen across Australia and Indonesia, attend a festival screening or host your own pop-up festival.