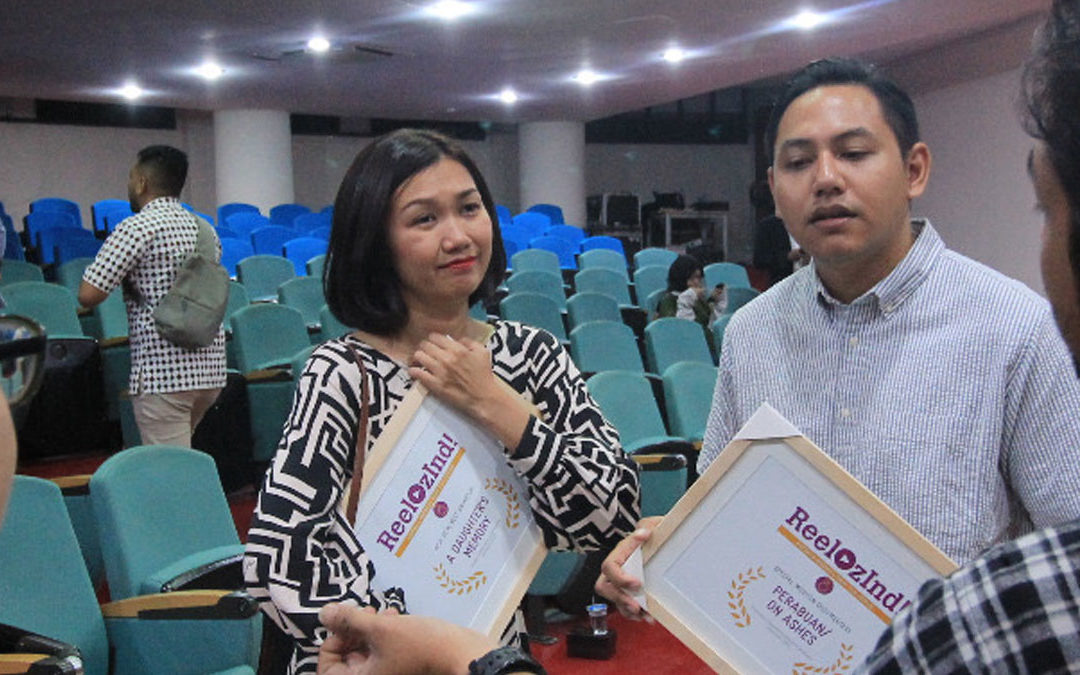 Kartika Pratiwi (above, left) is the director and producer of A Daughter’s Memory, the winner of the Best Film and Best Animation categories at the ReelOzInd! 2019 short film festival. The animated documentary focuses on the early life of Svetlana Dayini, the daughter of former senior national leader of the Communist Party of Indonesia, Njoto.

A recipient of the 2017 John Darling fellowship, Pratiwi undertook an intensive course in ‘Video-making as research’ at Monash University’s School of Film and Journalism. We spoke to the accomplished young filmmaker how A Daughter’s Memory is more than just a film.

How did you and your team come across Svetlana’s story?

I have been working with 1965’s survivors for years and got a lot of information about Svetlana’s story as a result. She is a survivor who inspired us because of the daughter-father relationship in her story.

Why is Svetlana’s story important to tell?

Young people in Indonesia today mostly don’t have any idea about what happened in the 1960s: the lack of sources, the social trauma, the mono-narrative history. A Daughter’s Memory focuses on the memory of a young girl who misses her father, using universal language.

What was your team’s aim in making this film?

We wanted to make a film with a simple narrative about memory but also one with a strong and powerful message. It’s a film from the perspective of a young girl — a daughter of the victim — and focuses on places which played an important role in her memory.

The positioning of A Daughter’s Memory in 1965’s Indonesia is blurred between the boundaries of the certainty of history, the reasonableness of history, and between what has happened and what should happen. We believe it is important to see different perceptions and interpretations of the past through individual memory.

This film is not merely about making an impact for the audience but also about Svetlana as an individual; how she as a survivor can articulate her memory.

Why did you decide to animate rather than use filmed footage?

I think this hybrid documentary genre, called animated documentary, also makes A Daughter’s Memory different from others. Through animation, we want to make sure that the values of the survivors — through verbal as well as gestural statements — are transferred to the present public.

A Daughter’s Memory gives us an entire life of storytelling within 10 minutes. This film is also a process of engagement; Svetlana, as an individual, recounts her personal story which she claims forms her identity. A Daughter’s Memory is very different from our previous film as we had difficulties to find archives to support visualization; the decision to animate was a process of agreement between us as a group of filmmakers and Svetlana herself.

How have viewers received your film to date?

We have done a few pilot screenings in Indonesia and abroad and were impressed by lots of questions we gathered during the event. For example, in Ngepas Library in Yogyakarta, we invited young people from local universities as a surprise; they hadn’t heard Svetlana’s story before.

Another screening outside Indonesia at Leiden University was attended mostly by exiles who were emotionally moved by the film as they had the same experience, being sent to prison. They were more interested in discussing how to react to truth-telling and reconciliation and current conditions in Indonesia. By then, we decided to offer a bigger screening — but still limited — in the university while we kept our eye on security itself.

We then decided to make a website to assist our target audiences in offering their own screenings or access to the film.

What has the website been designed to do in conjunction with your film?

We divide outreach into three layers: educational outreach with students and their teachers, social media and online platforms, and community building. The latter two layers both include ex-survivors, scholars including historians, and civil society. To that end, A Daughter’s Memory offers schools and community groups – and in particular, youth in public schools — the opportunity to initiate discussion about memory and dealing with the issues from the past through film.

This film and other educational materials will then connect the issues faced in 1965 to audiences’ personal experiences in an effort to understand alternative perspectives of history alongside other forms of trauma, violence, and truth. We will work with history teachers to use A Daughter’s Memory as an educational tool for history lessons.

On the social media side, we will build a space and partner with other websites and online outlets to deliver a wide range of interactive content. By using social media, civil society and educational institutions that serve history teachers and young adults will expand the use of the film and its accompanying other materials to create a space for discussion.